A local artist has been asked to create an illustration to represent the new Center Parcs in Bedfordshire. David Litchfield lives in Bedford with his family and was approached by Center Parcs in August to create his interpretation of what the Subtropical Swimming Paradise at the new village, Woburn Forest, will look like once finished.

Lee Jakubik Senior Designer at Center Parcs said “We were keen to get the talent and inspiration from a local artist to help us create an image for Woburn Forest. David’s work is amazing and really fits with our brand; lively, creative, fun and family-friendly. We had considered a number of artists from across the UK but the style and quality of David’s work really stood out!”

David Litchfield said “I couldn’t believe it when Center Parcs contacted me; it was completely out of the blue! Art is my passion and when I received this commission, I took the plunge and decided to finish at my full-time job and dedicate my time to my art. This work has given me the confidence to start up my own business and do what I love every day as well as providing for my wife and son”.

David has been an artist for many years. He first began drawing when he was very young, creating ‘mash up’ comics for his older brother and sister. Since then David’s work has appeared in magazines, national newspapers, books and on T-shirts. In the last few years he has illustrated for The Beano, The Telegraph Newspaper, Anorak Magazine and Flamingo Magazine. He is also a regular contributor to Creaturemag and the Bedford Clanger newspaper. David has recently exhibited his illustrations in both solo and group shows in the UK, Europe and America.

Center Parcs Woburn Forest is on track for opening and will be welcoming its first families for short breaks in spring 2014.

Committed to enhancing the forest and wider environment, Center Parcs aims to be one of the leading sustainable ‘Large Scale Tourist Destinations’ in the UK.  The Center Parcs Sustainability Strategy, launched in 2011, promises to reduce Center Parcs carbon emissions by 20% and produce 10% of its energy from renewable sources by 2020.  Center Parcs currently uses a variety of different energy saving choices including:

Center Parcs is investing in energy efficiency and renewable technologies - such as District Heating - to achieve the aim of consuming 25% less than the average existing Center Parcs village. 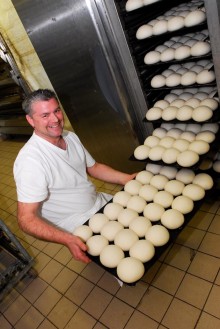 Ampthill-based bakery, The Cottage Bakery, have been awarded the contract to supply the new Center Parcs Village with baked products.