Center Parcs has won Best Family Friendly UK Holiday Provider at the Tommy’s Awards, which took place on 16 March at the Landmark Hotel, London to a packed audience of household name companies and Tommy’s supporters.The Tommy’s Awards recognise and celebrate the best family-friendly companies that help make the lives of parents and parents-to-be that little bit easier.

Earlier this year, Tommy's and Bounty asked Bounty's trusted Mums Panel to help us shortlist their favourite family-friendly brands. We then put the vote out to parents across the UK.This year 10,000 cast their vote via Bounty, the pregnancy and parenting website.

Caroline Gormley, Director of Fundraising for Tommy’s commented “The Tommy’s Awards is a proud moment in the calendar for Tommy’s. It gives us the opportunity reward the families who have triumphed over adversity and the companies who have made life that little bit easier for baby and mum. We are delighted that Center Parcs was recognised by the 10,000 people who have voted.”

Now in its 23rd year, the Tommy’s Awards recognise heroes of families who’ve have been touched by pregnancy complications, or the loss of a baby. Each year in the UK, one in four parents lose a baby through miscarriage, stillbirth and premature birth.

As the UK’s number 1 baby charity, Tommy’s gives advice and support to over 500,000 pregnant women every month. We also fund pioneering research into miscarriage, premature birth and stillbirth, and provide immediate care for 35,000 mums, dads and babies in our centres across the UK. 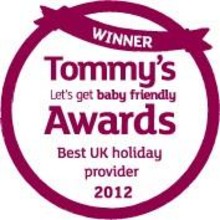 At a glittering ceremony at the Landmark Hotel in London, baby charity Tommy’s announced the winners of its annual Let’s get baby friendly Awards. 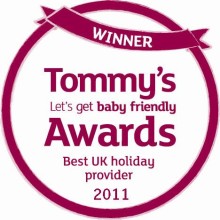 Tommy’s announced the winners of its annual Let’s Get Baby Friendly Awards during a star-studded ceremony at the Langham Hotel.