Aqua Sana Woburn Forest has been awarded Highly Commended for the Resort Spa of the Year Western Europe and Scandinavia category in the World Spa and Wellness Awards.

The World Spa & Wellness Awards describes Aqua Sana Woburn Forest as "a property that is truly raising the standard of spa in its country".

“We are absolutely over the moon that Aqua Sana Woburn Forest has been given this fantastic award and only a matter of months after opening too! To be named as one of the best spas in Europe is very special and we are so proud of what we’ve achieved in such a short space of time.

Aqua Sana is so unique, in the heart of the forest with 25 spa experiences, we’re a perfect introduction to the world of spa and attracts first timers and spa fans alike. Like the rest of the team, I feel very lucky to work for such a warm, welcoming, high quality spa with such a dedicated team and we are all so honoured to have been recognised in this way.”

Aqua Sana Woburn Forest opened in June 2014 and has welcomed thousands of guests since. As the fifth of the Aqua Sana Spas, it is true to the original ethos of being close to nature, welcoming and offering a variety of experiences helping people to step over the threshold into the world of spa but also embraces new ideas and technology to bring the best of the ‘new’ into the experience. 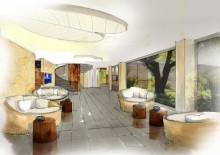