Center Parcs UK has raised more than £1,000,000 for national charity Together for Short Lives. The seven-figure sum is the largest amount Center Parcs has ever raised for a charity partner.

Center Parcs began supporting Together for Short Lives in 2016 and raises funds through donations from guests, match funding, employee fundraising and some epic challenges along the way.

The partnership was initially due to come to an end in 2021 but, in light of the impact of the coronavirus pandemic on the third sector, Center Parcs has now pledged to support the charity until at least 2022.

Center Parcs’ CEO Martin Dalby said: “Over the last few months, charities like Together for Short Lives have needed support more than ever. The demand on their services has increased greatly, while their ability to fundraise in traditional ways has virtually disappeared. We have always felt strongly that we have a responsibility to give back wherever we can and, now more than ever, we want to stand behind Together for Short Lives and help them continue to make a difference to so many lives.”

Together for Short Lives want to help every child and family living with a life-limiting or life-threatening condition get the very best care and support they can, so they can make the most of every moment together.

The partnership supports the 54 children’s hospices across the UK and each village also raises funds for their closest hospice. Since the partnership began:

Martin Dalby added: “The possibility of any child having their life shortened by illness is such an emotive subject and one that isn’t talked about enough. The work that Together for Short Lives does is fantastic, both in supporting families with seriously ill children, but also in breaking down preconceptions around children’s hospices and showing that they provide an absolute lifeline for these families. The synergy between Center Parcs and Together for Short Lives is undeniable. After almost five years of partnership, our colleagues and guests are still just as engaged as they were on the day we announced the partnership and are constantly finding new and innovative ways to raise money and awareness for such a great cause.”

Andy Fletcher, Chief Executive of Together for Short Lives, said: “We are so lucky to have found in Center Parcs an ally, an amazing supporter and a wonderful friend to the charity. Reaching this incredible £1million milestone is just the best news for families – who have been facing challenges like never before these past few months, all on top of caring around the clock for their seriously ill child. It will mean the world to the children’s hospice services up and down the UK, who work tirelessly to support these families too. I’m thrilled to continue working with Center Parcs into 2022 when I know we will do even more to help children and families make the most of their precious time together.”

In addition to financial support, Center Parcs also empowers employees to participate in volunteering opportunities, as well as donating more than 100 short breaks to allow families to spend time together and make precious memories. For some families, the holiday will be the only one they can spend all together, making it all the more poignant. 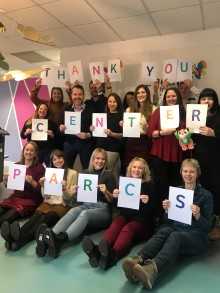 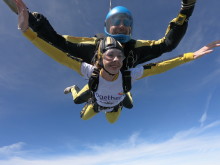 Staverton-based dad and daughter Andy and Ellie De’Ath have shown nerves of steel by taking on a skydive, raising more than £2,500 in aid of a local children’s hospices charity and national charity, Together for Short Lives.