Center Parcs is proud to announce that it is sponsoring the Super Sibling Award at the Tommy’s Awards 2014 for the second year running.

The Center Parcs Super Sibling Award recognises a brother or sister of a little one born too soon, celebrating the courage and support they have shown during the early arrival of their new baby brother or sister.

Now in its 19th year, the Tommy’s Awards recognize both individuals and organizations that make a difference to families all over the UK, and in particular those whose lives have been touched by pregnancy complications and the loss of a baby.

This year, Tommy’s is once again partnering with Bounty and will be asking its 2.5 million members to nominate individuals for the award. For every vote cast, the parenting club will be donating £1 to Tommy’s. The nomination period will be open from July until December 2013.

The winners will be announced at the prestigious Tommy’s Awards ceremony at the Landmark Hotel, London, on Friday 21 March.

Center Parcs Sales & Marketing Director, Colin Whaley, said: "It is a privilege for us to sponsor the Super Sibling Award for a second year, recognising a brother or sister of a baby born too soon. Last year this important award celebrated the outstanding courage and support one family had shown during an extremely difficult time and we are delighted to be recognising other deserving families again this year.

"Tommy's members have been voting Center Parcs as the best family-friendly UK holiday provider for 10 years now and after a decade of being involved in these awards it’s wonderful that we are able to support and celebrate exceptional families and individuals,” Colin continued.

Jane Brewin, Chief Executive of Tommy’s, said: “We want to give parents the opportunity to say “thank you” to friends, family, neonatal nurses, GPs and midwives who give comfort and support through the toughest of times. These remarkable individuals are there for parents when they need it most and the Tommy’s Awards is a way of honoring all that they do.

”Since its inception, the Tommy’s Awards have also credited over 200 organisations for making the lives of parents with babies and young children that little bit easier. Tommy’s members have voted Center Parcs as the best family-friendly UK holiday provider each year for a decade."

Voting for the Tommy’s Awards with Bounty will be open from Wednesday 10 July 2013 – December 2013: go to http://www.bounty.com/tommys-awards-2014 for more details.

About Tommy's
At Tommy’s we believe every pregnancy should have a happy ending. We want to give every baby the best chance of being born healthy, so we work to fund medical research into the causes of premature birth, stillbirth and miscarriage, and provide a free information service that educates all parents-to-be about health in pregnancy. Our information service is informed by our medical research and includes a telephone midwife service, a comprehensive website and free books and leaflets promoting health in pregnancy. By 2030 we want to halve the number of babies who die during pregnancy or birth.

About the Tommy's Awards with Bounty 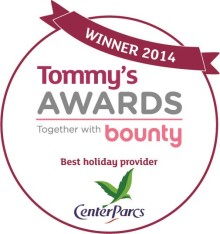 Center Parcs has been named the Best Holiday Provider at the Tommy’s Awards for the 11th consecutive year. 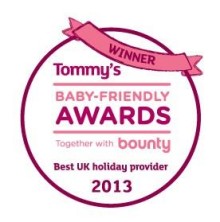 National baby charity Tommy’s announced the winners of its annual Baby-Friendly Awards which took place at the Landmark Hotel, in London on Friday 22nd March.